EC$7.5m for Road Reconstruction at Layou and Laudat

As the Dominica Labour Party administration continues with its policy to build back better post Tropical Storm Erika, contracts amounting to EC$7.5m were signed on Monday, June 12th, for the rehabilitation and reconstruction on two major roads in Layou and Laudat.

The contracts were signed by Permanent Secretary in the Ministry of Public Works, Denise Edwards and Francis Emanuel of contracting firm Offshore Civil and Marine Incorporated. 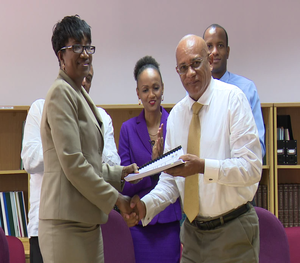 The contract for Layou was signed for over $5.7m for the rehabilitation of the highway and river defence wall west of the Hillsborough bridge located to the North bank of the Layou river.

“The works will include removal of damaged steel sheet piles and associated works; the installation of new sheet piles; construction of approximately 142 metres long reinforced concrete wall; reinstatement of road pavement and drainage structures,” she revealed.

The expected duration of the project is six months.

This area of Layou was significantly impacted during the passage of Tropical Storm Erika.

Honourable Member of Parliament for the St Joseph Constituency, Kelver Darroux, thanked the Honourable Prime Minister and Minister for Finance, Dr. Roosevelt Skerrit, and the Minister for Public Works and Ports for making available the necessary funds for the project.

Currently there is a temporary bypass for commuters in that area. He encouraged commuters and residents to exercise caution and tolerance during the construction process.

Meanwhile the contract for the project in Laudat was signed for over $1.6m.

The project is expected to reduce risks associated with landslide hazards in the Roseau Valley; thereby making the site and surrounding communities less vulnerable to future adverse weather-related events.

Honourable Blanchard gave the scope of work to be undertaken.

“The project will comprise slope stabilization and realignment of 155 metres of road to include excavation of the cliff for the new road alignment; terracing and erosion control; construction of approximately 40 metres long reinforced concrete wall; reinstatement of road pavement and ridged concrete surface cost with associated drainage and other miscellaneous works.”

The project is expected to last three and a half months.

The total sum was funded by a loan from the Caribbean Development Bank.

Both contracts have been awarded to Offshore Civil and Marine Incorporated after a notice of invitation to bid which was published locally, regionally and internationally.

The Honourable Public Works Minister extended congratulations to the contractor while placing her confidence in their ability to complete both projects within the timeframe based on the design specifications agreed upon.