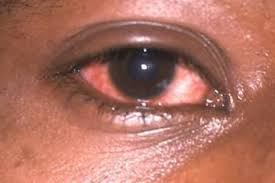 The Ministry of health and Environment wishes to inform the public of an outbreak of Viral Conjunctivitis, also known as Red-eye.

Red Eyes is an infection of the covering of the surface of the eye and eyelids.

In a press release issued on May 30th, the Ministry informed that cases of Viral conjunctivitis or red eye are being reported from the Marigot, Portsmouth and Roseau Health districts . No cases have been reported in the health districts of St. Joseph, La Plaine, Castle Bruce and Grand Bay.

As a result, the public is advised to be vigilant to prevent further spread of the disease.

Red Eye is spread easily from person to person. The germs are passed on to others through hand-to- hand contact when hands are not washed after contact with discharge from an infected eye.

Symptoms of red eye include:

Handwashing is essential as it is mainly spread through hand to hand contact when hands are not washed after contact with discharge from an infected eye.

Persons should avoid crowded areas like church, school, and shows,

Sharing towels and Using other people’s sunglasses and eye make-up.

The Ministry is also reporting that cases of chickenpox are on the increase but is not at this stage considered an outbreak. Cases have been reported in Grand Bay and Roseau Health districts for the past weeks.

Chicken pox is a highly contagious viral disease that is spread by direct contact or breathing in germs from someone’s cough or sneeze or by sharing food or drinks. You can also get it if you touch the fluid from a chickenpox blister. Two weeks after exposure, chicken pox spots appear on the body.

Symptoms will occur 10-21 days after exposure to chicken pox. These include:

These symptoms usually occur 1-2 days before the spots appear on the body and can be treated by using a baking soda bath, Calamine lotion as needed to the skin, paracetamol or Tylenol for fevers above 100 degrees. The use of Asprin is not advised.

All health facilities have been alerted, and active surveillance has been initiated. Field investigation as well as community level education have been ongoing.