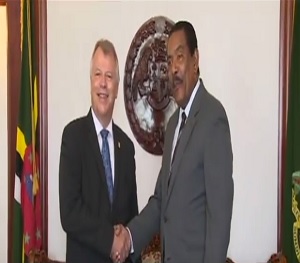 President of Dominica, His Excellency Charles Savarin received credentials of new ambassador-designate of Switzerland to Dominica, Urs Schinder on Wednesday.

In welcoming the new ambassador His Excellency, the President made reference to the recent moves to deepening of relations between CARICOM and Switzerland in areas of mutual interest.

His Excellency Savarin says as a member of the OECS and CARICOM, Dominica looks forward to strengthening these areas at a bilateral and regional level.

The head of state also noted the offer for support by the government of Switzerland to Dominica for the establishment of a permanent mission to the United Nations in Geneva and is optimistic for discussions on the matter.