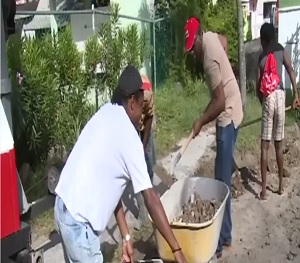 The Dominica Labour Party administration has united with scores of Dominicans to work together in a spirit of Koudmen for nation building.

On Saturday May 20, the Dominica Labour Party administration led by the Hon Prime Minister himself, Dr. Roosevelt Skerrit and people of the city of Roseau and environs came together in full force to rehabilitate the road leading to the Roseau Health center in the Botanic Gardens.

The nation’s leader says this project, which would have otherwise cost Government over $300,000, symbolizes the launch of a series of voluntary projects to be undertaken by his Cabinet.

Hon Skerrit explained that Government decided to give back to the nation by embracing the spirit of Koudmen..

“What we have done is that the Dominica Labour Party has decided to embark on a number of community-based projects across the country, so this is the first actually of many such community based projects”

The Botanic Gardens is one of the most popular tourist attractions in Roseau and with Government’s drive to develop the tourism sector and improve the road network, this project is fitting.

“We have chosen the Gardens as the first project because this is one of our premiere tourism sites. That’s where literally 100% of our tourist visit and the road is down for improvement by the Government.  We’ll be doing the entire road network on the Botanic Gardens so we decided to do this section … as a contribution from the Dominica Labour Party to nation building.”

The Hon Prime Minister revealed that building homes will also be one of the koudmen projects undertaken.

“One of the things we are going to be doing also is to build homes; mobilize the tradesmen and go in to build homes for needy families across Dominica, again soliciting contributions from people who have building materials and so forth.” 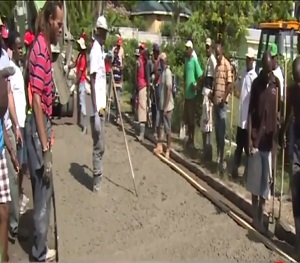 Volunteers on this project not only came from communities near Roseau but across the island.

“This is just a small spark in the bush fire that will be ignited around Dominica as far as community projects is concerned. Rekindling this whole spirit of koudmen and volunteerism in Dominica and believe you me the fourth of November for our national day of community service this will serve as a springboard in the various communities to see a massive turnout of people on our community-based projects,” Member of Parliament for La Plaine, Petter Saint Jean remarked.

MP for Roseau Valley, Dr. Collin McIntyre said, “This initiative to me is the beginning of a serious koudmen programme for Dominica.”

“What I see here today is very, very promising; and these are the folks we have to take care of in the future because they are giving their service back to the state for free,” he said.

Meantime, the Hon MP for Grand Bay, Justina Charles thinks the idea of koudmen has been “dwindling away and that (the project) is showing that it is still alive.” She added, “It’s just a matter of mobilizing; that is where again leadership is important.”

She is hoping that this type of community spirit can be replicated in all constituencies.

Materials and equipment for the project were contributed by private citizens and local businesses.

Work on the project continued on Thursday May 25th and Tuesday May 30th.