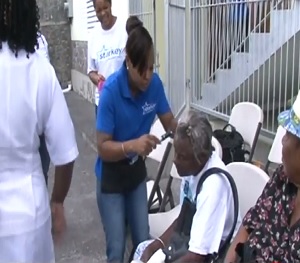 The Starkey Hearing Foundation of United States of America has partnered with the Rotary Club of Dominica and the Ministry of Health to bring relief to the hearing impaired.

On Friday, which was the final testing day of the mission, individuals from the Roseau, Grand Bay, Castle Bruce and the La Plaine health districts gathered at the Goodwill Parish Hall to be seen.

Service Projects Coordinator of the Rotary Club of Dominica, Marvlyn Birmingham, spoke with GIS news about the mission.

“We saw sixty-four in Portsmouth yesterday, but we fitted forty-three and provided 79 hearing aids. Today we have a little over one hundred who have pre-screened for the Roseau centre and we expect to fit a number of them with hearing aids,” she informed.

Birmingham also informed that an after-care programme has been implemented to monitor the individuals who have received hearing aids.

Starkey’s International Development Director for the Caribbean, Kirk Richards says the foundation is happy to assist the health sector in Dominica. Richards encouraged the public to avoid activities which may affect their hearing.

“From what I am seeing here, I notice that Dominicans love their music and they would drive by and you would hear music. It is important that they turn down the volume on the radio and start paying attention…it is very important that we start taking care of our ears.”