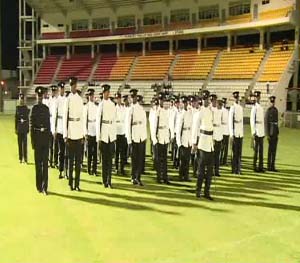 The Hon Minister for Justice, Immigration and National Security, Rayburn Blackmoore has voiced his support to police officers who perform their duties regardless of political affiliation.

The Hon Minister made the remark during his contribution to the debate of the supplementary estimates this week at Parliament.

He gave his support to officers who perform their duties regardless of political affiliation.

“Nowhere in this oath has said that I will serve the Dominica Labour Party or the United Workers Party; a police officer serves the people of Dominica, the country of Dominica; and when we go to bed, we have to have the assurance that the police have our backs m. speaker, and that’s the bottom line.”

“Any attempts therefore that can be construed as an attempt to buy into the rhetoric of any political party, cannot be serving the best interest of the people of this beautiful country,” the Justice minister said.

The Dominica Police Force received $986,000 to facilitate the purchase of three vehicles.