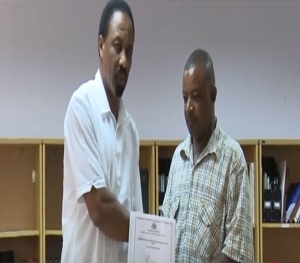 On Friday, a contract of $720,125 was signed between the Ministry of Housing and contractor, Holford Vidal for infrastructural development in Plat Ma Pierre, Colihaut.

One thousand six hundred and seventy-five feet of road will be constructed to give better access to the new development.

Following Tropical Storm Erika Plat Ma Pierre was identified to relocate the people of the Colihaut constituency who lost their homes because of the storm.

Charitable organisation of the Seventh Day Adventist Church, Adventist Development and Relief Agency (ADRA) partnered with Government to construct six units while an additional three petro casas are also being constructed in the area to house needy families.  Government is also making available 21 lots for sale in the area.

Member of Parliament for the Colihaut Constituency, Lady Catherine Daniel is pleased for the progress of this new development which she says has been a long time coming for her constituents.

“From that constituency we had 146 applicants, so you can imagine how trying the selection would be.  In the application, we had a lot of people who already owned their property and so we had to go through this list to sift…so that we could come down to that thirty people…it’s to the most needy…so the process took a long time,” she explained.

Hon Daniel implored the contractor to be prudent with the project and employ as many young men as possible.

sixty-seven homes were affected by Tropical Storm Erika in the Colihaut constituency: four in Dublanc, one in Bioche, eighteen in Colihaut and forty-four in Coulibistrie.

The housing minister took time to recognise the contribution of ADRA and the Venezuelan government to this effort.

Work is expected to be undertaken over a period of four months.  In addition to the construction of new roads, proper concrete line drains will also form part of this first phase of development in Plat Ma Pierre.