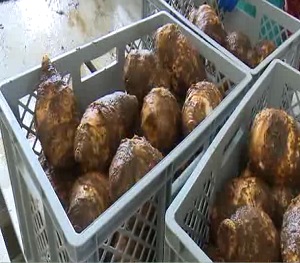 This was confirmed by the Hon Minister for Agriculture, Johnson Drigo in Parliament on Wednesday.

Hon Drigo says this is further evidence that Government continues to invest in the agriculture sector and continues to expand its market reach.

“Today, we sent out our first trial shipment of a container of dasheen to the United States, 22,000 pounds.  This is what we are doing to move the agriculture sector forward.  As we speak, the synergies between agriculture and trade is improving…”

Hon Drigo made this announcement while supporting the supplementary estimates of over $155 million presented to Parliament by the Hon Prime Minister on Tuesday.

Hon Drigo dismissed claims from opposition parliamentarians that inadequate attention is given to agriculture and advised them to encourage their constituents to take advantage of the $10 million loan facility at the AID Bank.

Hon Drigo says over the years, millions have been invested in the sector for soft loans.

“Over $130 million has already gone into the sector; soft loans to the farmers into production, and we are doing everything to help them in export.  The packhouses are swinging, people are just calling the packhouse asking for fresh produce...the farmers have come to realise that there is money to be made, they will not be distracted by the opposition and they are trying their best…”

“What is important is that the agricultural sector is alive and its moving forward and we will not be distracted by the opposition where agriculture is concerned,” he said.