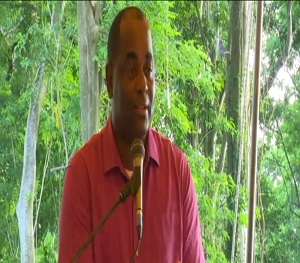 The nation’s leader has cited investment in construction a new Jungle Bay as a way in which the Citizenship by Investment programme is being used for the sustainable development of the nation’s economy.

On Sunday, the ground of the new development was officially blessed by His Eminence, Kelvin Felix as work continues to rebuild world renowned resort which was destroyed by Tropical Storm Erika in 2015.

President of Dominica, His Excellency Charles Savarin and Mrs. Savarin, members of Cabinet as well as members of the diplomatic corps attended the ceremony.

“…Hotels like Jungle Bay will stand the test of time whether our CBI receipts are up or whether it is down because he [Samuel Raphael] will not require the CBI to sustain himself it will be the guest coming in and filling the rooms, that’s how we are going to make the monies back of our investments in the CBI.  We are also using the CBI funds to reduce on our national debt; to reduce on poverty levels because if poverty levels go down, there will be more productivity and there will be more economic activity in our country; and these are the things we are using the CBI funds [for] – to invest in our infrastructure, to build our roads…”

Prime Minister Skerrit also indicated that a large part of the CBI funds will be used for the construction of an international airport.

Hon Minister for Tourism, Senator Robert Tonge is also pleased that the Citizenship by Investment Programme is promoting growth in the Tourism Sector. He commended Dominican developer, Samuel Raphael for capitalizing on the Programme to restore Jungle Bay Resorts.

“I’m proud that he has seen the opportunities that the Government has provided and has capitalised on them.  Our role as government is to provide an enabling environment so that persons can capitalize on and he has used the Citizenship by Investment Programme to do just that,” Hon Tonge said.

The old property, rated number three among the top 25 hotels in the Caribbean, attracted visitors worldwide before the events of 2015.

The new development will occupy twenty acres of land in Morne Acouma, Soufriere and promises to be even more attractive than the first Jungle Bay which was nestled in the eastern community of Delices.

While the old had thirty-five cottages, there are plans for sixty eco villas on this new property.