Over $700k for Road Development in Kalinago Territory 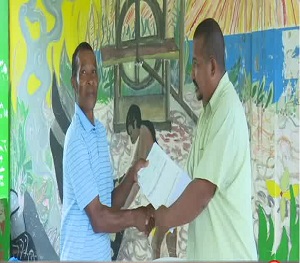 As the upgrading of the road infrastructure around the island continues to be a major priority for the Government of Dominica, the Kalinago Territory, on Friday, received cheques of over $700,000 for three major roads.

A cheque of over $390,000 was presented for the second phase of the Horse Back Ridge road rehabilitation.

“We are offering it as one of our tourism products for sightseeing…also we have an amount of $137,500 for the Upper Hilton road and in the Concorde community… we have $147,700 for the completion of the piece of road in La Glee; and in the Sineku community we have $41,600 for the development of roads in the housing scheme…,” Hon Member of Parliament for Salybia, Casius Darroux explained.

The project which hopes to employ up to one hundred locals begins this week.

The Ministry of Kalinago Affairs has engaged Waikada Incorporated to implement these projects in the Kalinago Territory.

Kalinago Chief, Garnet Joseph considers it a privilege for this local company to partner with the Ministry of Kalinago Affairs for the development of the Territory. Waikada Incorporated has been involved in community development since 1992.