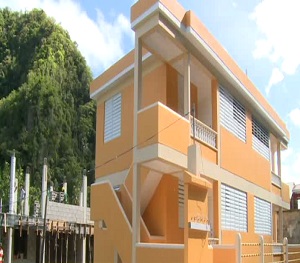 Less than six months after losing their homes in a devastating fire, six families have been presented with keys to new apartments in Silver Lake courtesy of the Government of Dominica.

The keys to the six apartments were officially handed over by the Hon. Minister for Social Services, Family and Gender Affairs, Lady Catherine Daniel on Friday May 12th 2017.

“We just want to wish the recipients of these new apartments very well; thanks for their patience and their understanding because whatever we do, we do it in the interest of people.  We only have six apartments and there were eighteen families but as you can see behind us there, there are other apartments being built,” she said.

Hon Daniel stated the construction of the second apartment building underway is set to be completed in July.

“We have twelve being built for the other [families]… so by July the others will be there.”

Recipient Emma Charles is grateful for her new home.

“I was a shop-keeper,” she said, “I just want to say I appreciate everything the Government do for me today; my family and I we appreciate it; thank you.”

Shirley Toussaint who also received a new apartment expressed her thanks.

“I was wishing for that day to come…I appreciate it from the bottom of my heart…thank you for everything.”

A total of eighteen families were affected by the fire.