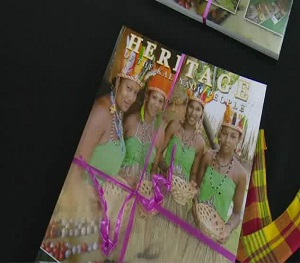 The launching of the Kalinago Heritage magazine, volume two, was among one of several activities to kick of DOMFESTA 2017.

The 34th edition of the Dominica Festival of Arts (DOMFESTA) was officially launched at the Old Mill Cultural Centre last Wednesday.

Hosted annually by the Cultural Division and the National Cultural Council, the festival will be held throughout May, with a focus on the contemporary arts.

DOMFESTA 2017 will comprise of events organized by various cultural associations and institutions, as well as those organized by the cultural division and the National Cultural Council.

One of the highlights of the ceremony was the release of the Kalinago Heritage magazine. The 2nd edition of the magazine covers various aspects of Kalinago heritage, including architecture, language, cuisine, carnival and education.

Speaking at the launching ceremony, Hon Minister for Kalinago Affairs, Casius Darroux said, “I believe that there are other significant aspects of the Kalinago culture yet to be documented such as survival skills, traits, withstanding the elements and understanding and preserving of mother nature…,” he said.

The main events slated as part of DOMFESTA include jazz and open mic night on May 6th at the purple turtle beach club; the launching of the national art gallery on May 8th, at the Old Mill Cultural Centre, and lyrics under the stars on May 11th at the Alliance Francaise among others.