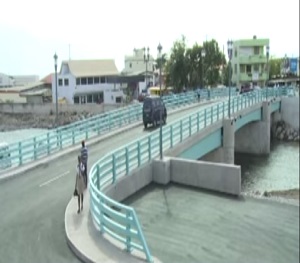 Dominicans will have a chance to suggest a suitable name for the new west bridge.

The Hon Prime Minister, Dr. Roosevelt Skerrit made the announcement while speaking at the official commissioning of the new west bridge on Monday May 1.

“We have to immortalize this chapter in our nation’s page of history,” the nation’s leader said, “I do not wish unilaterally to impose a name on you…Very soon we shall make public the website to which each of you can go and suggest an appropriate name for this gateway.”

The Hon Prime Minister said the chosen name will be announced on November 3rd as part of his Independence Address to the nation.

The Emmanuel Christopher Loblack bridge which is to the east and leads into the city has also received a facelift with a portrait of the trade union pioneer installed overhead.

Hon Skerrit recognized EC Loblack for his work as a trade unionist and revealed that a national scholarship will soon be announced in the name of Loblack.

The Dominica leader asked Dominicans to take care of the $18.2 million investment.

“I want it to remain looking like the new west bridge.  Keep it clean; keep it tidy; respect the investment, please do not vandalize it, do not deface or destroy any aspect of it…,” he said.

Meantime, Hon Skerrit has extended an invitation to residents and business owners of the city of Roseau to be part of the plan for the enhancement of the city.

“I hope to be in a position as early as this year’s budget announce  a regime of incentives geared at encouraging property owners in Roseau to upgrade and enhance their residences and places of business.  It makes no sense, Government fixing roads and sidewalks but leaving so many properties in the capital city remaining dilapidated and run down.  To this end, the enhancement of Roseau must be a team effort and exercise, henceforth I will be looking to every property owner and resident of Roseau to play his or her part in this very exciting process of urban renewal.”

Thousands of Dominicans turned out to witness the commissioning of the new west bridge last Monday.