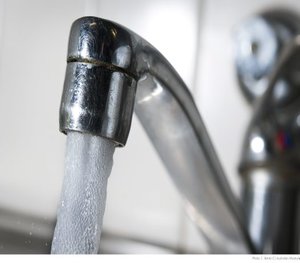 The water supply system was officially commissioned on Friday the 28th of April at Knight’s Place in Slyvania.

Addressing the ceremony Hon. Prime minister and Minister for Finance, Dr. Roosevelt Skerrit commended the Hon. Parliamentary Representative for the Mahaut constituency, Rayburn Blackmoore, for his tireless efforts in bringing pipe-borne water to his constituents.

He believes that this project is a major achievement for Dominica.

“I still believe that people’s access to water should not be looked at as these hard economic investments because by not having water in these communities you are denying these people of a number of opportunities to create wealth for themselves and to maintain high hygienic practices…,” he said.

The $7.5m project was expected to be completed in 2015 but was delayed by Tropical Storm Erika.

An initial investment of $2.8m was made available by Government as a grant and the balance as a soft loan from the Dominica Social Security.

The Hon Parliamentary Representative for The Mahaut constituency Rayburn Blackmoore told residents that this project is testament of the level of importance that the Government of Dominica places on adding value to the lives of citizens.

Meantime…the Hon. Minister for Water Resource Management, Reginald Austrie revealed that considering the partnership between the Government of Dominica and DOWASCO, the residents of these areas will receive free water connection and free water access for the first three months.