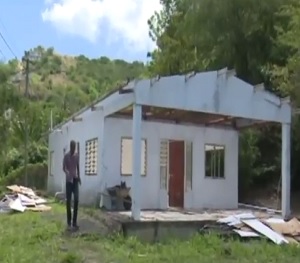 After more than thirty years, the inspector’s quarters on the grounds of the St. Joseph police station is being demolished and in it’s a place a new building to house the police inspector will be built.

Contractor on the project, is certain than as promised, in six months the job will done.

“This project was captured in the estimates for 2016/2017 and it is costing the Government in excess of $350,000 to construct a new inspector quarters here in the community of St. Joseph,” Member of Parliament for St. Joseph, Kelver Darroux informed.

GIS News was recently in St. Joseph constituency visiting several projects including road rehabilitation, new lots for village expansion and the reconstruction of the inspector quarters.

However, the Hon MP says of all these projects, the one dearest to his heart is a small home built for a middle aged, mentally challenged man in St. Joseph who desperately needed better living conditions.

Hon Darroux informed that the housing programme will continue in his constituency.  He says fifteen new homes will be built and several homes will be repaired.