My Primary Motivation is to Help People – PM Skerrit 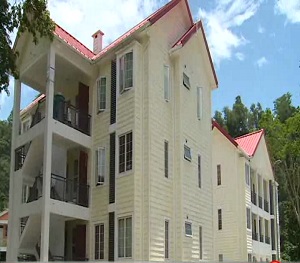 The Hon Prime Minister, Dr Roosevelt Skerrit as sixty apartments, twenty-four in Bath Estate and thirty-six in Elmshall were officially handed over to residents at a ceremony in Bath Estate last Wednesday.

Recognizing the need to improve the housing stock in Dominica, the Dominica Labour Party administration began the Housing and Sanitation Programme, also dubbed the Housing Revolution programme in 2006.

The nation’s leader shared his excitement for the sixty families whose housing conditions have been improved.

“There are scores of families in this country who would not be able to own a home, to shelter appropriately their families had it not been for the intervention of Government so I am very excited for the beneficiaries of these sixty apartments.”

He says his primary motivation as leader of the country is to exercise a moral obligation to help those in need.

“The Lord has placed me in a position to help people and I have an obligation to help those who are in need and I am making no apologies to anybody in Dominica for helping people…My primary motivation is not politics…it is to help people create a better life,” the Prime Minister stressed.

He informed that since its inception, $50 million has been expended on home repairs and $15 million for low interest mortgages which benefitted over one hundred public servants among other forms of housing and sanitation assistance.

“This ceremony here this afternoon is a clear manifestation of Government’s policy, Government’s commitment and the promise made to the people of Dominica of providing affordable housing for the people.”

He asked the sixty recipients to show their appreciation by embracing their new community and upkeeping the space.

“All we asking you is to take care of the building and to live up to your obligation in the agreement which you will sign.”

Meantime, the nation’s leader announced that by next August sixty more apartments will be made available in Roseau.

“I will say to the families who applied and who did not receive an apartment that God’s willing we will see some sixty additional apartments constructed in the city of Roseau and we expect these apartments to be ready by August of 2018…if you think these apartments are aesthetically beautiful wait till you see those in Roseau,” he said.