Half A Million On First Phase Of Secondary Road Enhancement In St. Joseph 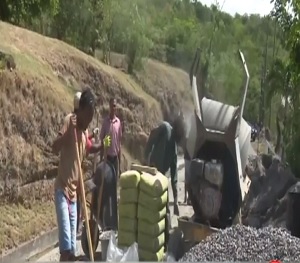 On a recent tour of the constituency, GIS news visited two of those roads with the Hon Member of Parliament for St. Joseph, Kelver Darroux.

Government, earlier this year declared that $11million, funds from the Citizenship by Investment Programme, will be put towards the rehabilitation of all secondary roads on the island.

One hundred and twenty meters of the Old Housing Scheme road in Layou is being reconstructed.

“This phase of the project is costing $77,000 and there is a second phase that will be looked at when this phase is completed,” Hon Darroux explained.

Contractor, Francis Joseph has employed ten young men and he is hoping to complete the project within two weeks. He says he is anticipating more of these projects in the future.

Government is also spending $119,000 to upgrade one of the roads leading to the community health center in St. Joseph, the MP revealed.

He says the road is significant to the community and has been in need of repair for quite some time.

All the men employed on the project are from the locality.

Hon Darroux says there are additional road projects ongoing in the constituency in the first phase of this secondary road enhancement project.

Over half a million dollars has been spent in his constituency so far.