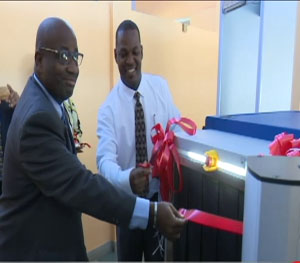 New screening equipment at the Douglas-Charles airport means less manual checks for security personnel, less time at the check point for passengers and ultimately more efficient security at the airport.

Tropical Storm Erika wreaked $40M worth of havoc on the airport in 2015. Chief Executive Officer of DASPA, Benoit Bardouille commended security personnel who for over one year were able to maintain efficient security checks manually.

“We are pleased to report that during the period no incident was reported with illegal or prohibited items leaving Dominica through the airport; a number of seizures however were made during that period which shows that the training of our security officers paid dividends during that difficult period.”

The need to comply with international standards required an urgent replacement of the security equipment. Government, through the CARICOM Development Fund (CDF) was able to secure over $1.4m to replace this equipment which began operations in October 2016.

Lennox Forte, Director of the Regional Development Division of the CARICOM Development Fund said, “This project is one further testimony of CARICOM at work, making the difference and positively impacting on the lives of its citizens.”

“This timely assistance from the CDF could have come at a more critical juncture when the world is experiencing a seismic shift towards enhancement of airport and aviation security. For small economies such as ours, strategic partnerships and assistance like this help us forge ahead with a vision to build back better,” he said.