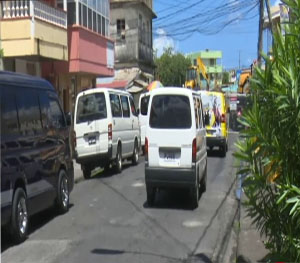 As the Government of Dominica is in its final stages of the $18.2m West Bridge project the traffic department is asking commuters to take note of temporary traffic arrangements in the capital city.

In an exclusive interview with GIS news last Thursday, Inspector Pellam Jno Baptiste, asked the Dominican public to cooperate as the traffic department has made some changes to the traffic arrangements that were in place before the construction of the bridge.

“Vehicles travelling along Great George Street will now turn left long River Street and then right on Kings Lane and left again on River Bank to the Chinese Friendship Bridge to exit the city of Roseau.  The section of road along River Bank from the intersection of Upper Lane has been cordoned off therefore vehicles travelling along River Bank from Independence Street will turn left on Upper Lane.  The section of road at Pottersville from St. Johnson’s avenue from the petrol filling station to Marvo’s bar on Steeber Street has been cordoned off from vehicular traffic.  However, pedestrian access is available to business places,” Inspector Jno Baptiste explained. Arrangements will continue until end of April.

Inspector Jno Baptiste urged citizens to work with the police to ensure the smooth flow of traffic during this time.