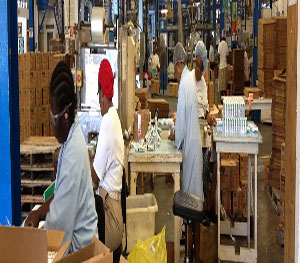 , Dr Roosevelt Skerrit has indicated that Dominica Coconut Products (DCP) may resume operations by the end of 2017. Hon Skerrit revealed this while speaking at a townhall meeting in Paix-Bouche last week.

DCP, manufacturers of coconut products mostly soaps, was forced to cease operations following destruction to the property as a result of Tropical Storm Erika in 2015.

Prime Minister Skerrit said Government had intentions of purchasing DCP to safeguard the livelihood of the many who lost employment due to its closure.  However, he says Government gave priority to a local investor who also expressed interest in the manufacturing plant.

“We gave him priority because the truth is I prefer it to be in the private sector rather than government owning it.  We are partnering with this local person to buy [DCP] and he has concluded negotiations with Colgate Palmolive to take over DCP with the use of the CBI funds.  We will be giving that investor in Dominica a loan of US$2M…, he said.

Hon Skerrit said at their most recent meeting, the local investor indicated that manufacturing should recommence in six months.

“So we will very well see manufacturing activities at the DCP before the end of 2017,” Hon Skerrit remarked.