Government of Mexico Commits US$5 Million to Construct Marigot Hospital 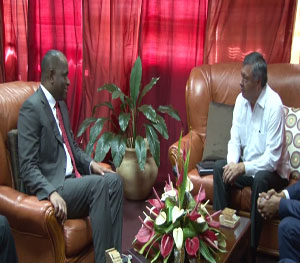 The government of Mexico has committed US$5M towards  construction of the new Marigot Hospital.

Mexico’s ambassador to Dominica, His Excellency Luis Manuel Moreno made the commitment from his government during a courtesy call to Hon Prime Minister, Dr Roosevelt Skerrit last week.

The Hon Minister for Foreign Affairs and CARICOM Affairs, Francine Baron and Honourable Minister for Economic Development and Investment, Dr. John Collin Mcintyre were also present at that meeting.

“After Tropical Storm Erika, you were one of the first to reach out to us ... expressing concern and also offering assistance and so we really appreciate the efforts of the Mexican people and the Mexican government,” he said further.

The amount is equivalent to EC$ 13.5 million dollars. Hon Skerrit thanked the ambassador for Mexico’s continued interest in the welfare of Dominica.

Dominica has had diplomatic relations with Mexico since 1991.