PM Calls for Positive Promotion of Dominica by Dominicans 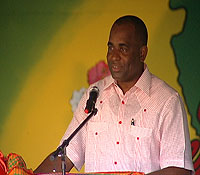 Prime Minister Hon. Roosevelt Skerrit is appealing to Dominicans to promote the island in a constructive way.

The prime minister was speaking to the opening ceremony of independence 2012 celebrations recently when he said that the constant barrage of negative comments affects every single Dominican.

“We must never be caught criticizing our country to strangers or even among ourselves.  We can speak about the bad things or the not so good things that are happening but we must always speak in a positive view of our country because after all we are the ones that make up Dominica.  We are Dominica and how could we speak ill of ourselves?  How could we instead of praying for God to bring progress to our country, we pray for God to bring darkness upon Dominica?  As if to say well if it affects one person, it won’t affect me.  If a hurricane comes here God forbid it will affect every person.  If we set out to destroy the schools, our children are going to suffer.  If we destroy government buildings, roads, parks in an indiscriminate manner it is going to affect us because monies the government would have to give a particular project will, we will then have to redirect the funds to correct the mischief that has been created.”

He also noted that speaking only negative of the country will have adverse effects on the nation’s children.

“In a time when the entire world is grappling with a global financial crisis, it is a time for us to engender within our country greater partnerships.  We have to give our children an understanding that being a Dominican, being in Dominica is a proud thing to proclaim. They should not grow up hearing negative things in their homes and in society day in and day out because if you continue to do that they will have a very negative view of life and get themselves in antisocial behaviours, get themselves involved in the use of and trafficking and the sale of drugs.  And then we ask ourselves why do we have so many people in the prisons.  It is because we as a society have failed to look out and look after the rest of society.”

Prime Minister Skerrit told Dominicans to speak of the illustrations of social progress that can be seen all over the island.

He listed the Dominica State College, The Waitukubuli National Trail and the State House Complex as three examples of positive developments.