The groundbreaking ceremony for a new National Hospital costing more than EC $100m will mean improved healthcare for Dominicans and visitors in just two and a half years. 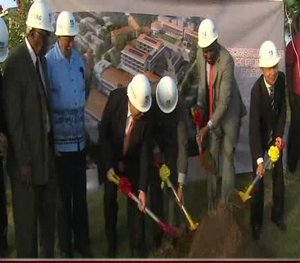 The Honourable Prime Minister, Dr. Roosevelt Skerrit, expressed with joy that he has wished for this moment since he first assumed leadership of Dominica.

“I wholeheartedly thank and congratulate Ambassador LI Jiangning, his technical and negotiating team and the Government and people of the People’s Republic of China for ensuring that this pillar project of the 2004 accord between our Governments is being honoured and delivered upon to the benefit of the citizens of Dominica.”

This project is one of the gifts promised by the People’s Republic of China: the Windsor Park Sports Stadium, the Edward Oliver Le Blanc Highway and Rehabilitation of the Dominica Grammar School.

He stated that the signing of the Memorandum of Understanding began the first step towards an investment that will modernize and revolutionize the delivery of healthcare in Dominica.

“High on the priority list of the many plans we presented to you was the commitment to building a new national Hospital. Here we are today, witnessing the official commencement of this project. Ladies and gentlemen, just like the postman we always deliver. Although some said it would not happen, we were never deterred. This is because this Labour Party administration is always committed to meeting its mandate. This groundbreaking ceremony attests with the seriousness with which we deal with matters of national importance and matters of state,” Hon Darroux commented.

Construction of the new national hospital is being done by Hunan Construction Engineering Group Corporation from the People’s Republic of China.