A group of 20 university students from Suriname spent this week in Dominica observing and learning about Dominica’s implementation of the single economic and trading space of CARICOM states known as the CARICOM single Market and Economy or CSME.

The group and facilitators of this exercise debriefed the public at a press conference on Thursday, May 26th.

This initiative, according to Salas Hamilton, Communications Specialist at the CARICOM Secretariat, stems from the body’s cognizance that it must do more to educate the populations about CARICOM.

In April 2015, students of the Dominica State College were part of a similar exercise in St. Lucia. 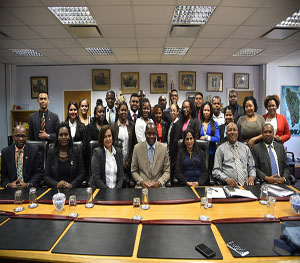 From 2008 to now, all 12 CSME states have had representatives visit sister states for the sake of education.

“Where we are in CSME is a critical stage in our development as a region because although we speak about the OECS and Dominica, we understand that it is because of coming together as region that we have 15 million people. So this week we looked at the different sectors in Dominica to find out just how the implementation of CSME is happening,” Hamilton explained.

He listed agenda items as visits to the Ministry of Justice, Immigration and National Security, Departments of Labour and Immigration, the National Accreditation Board, Digicel, Flow, First Caribbean Bank, Coalition of Service Industries, the Hon. Prime Minister and  Ross University.

“It’s always easy to sit in a classroom and speak theory but the best means of public education is when you can catch a plane and go to another country. As we move towards tighter integration, [having a practical sense of what the matters that we put into our laws (The Revised Treaty of Chaguaramas] means is important.”

One student, Afanaisa Kensenhuis, shared her findings at the end of the week of activities.

“The aim of the project was to investigate the extent of implementation of CSME in Dominica and to look for business opportunities offered in Dominica and in the single market. We went to different companies and institutions and they gave us ideas of how the CSME is implemented and the challenges that they face.”

She listed some challenges, “Dominica is also part of the OECS so they are more likely to do business with OECS countries, and there’s a lack of awareness about the opportunities in CSME. Shipping and a single currency are the two biggest challenges.”

Shiva Basropansingh, another student of the Anton de Kom University, shared the differences and similarities which he has observed on the mission.

He said, “You are bottling mineral water and in Suriname we do that as well but we don’t export water, maybe we can do that.

He compared his country’s booming agro-processing industry to Dominica’s.

“When you don’t see money in a business, you won’t study it so maybe [some students] should visit Suriname to see what we are doing over there and how you can make money with agricultural products and come back with some ideas to...get Dominica further.”

The group included bachelors and masters students of the fields of agro-processing, law, the sciences, finance, business and animal husbandry from different educational institutions in Suriname.

Suriname’s Female CARICOM Youth Ambassador was also a part of that group.

The students will report their diagnoses to the CARICOM Secretariat for review. Those findings will also be shared with the universities and colleges in Suriname and the other CSME member states.

Dominica’s Ambassador to CARICOM and the OECS, His Excellency Felix Gregoire hosted the group on Dominica’s behalf.