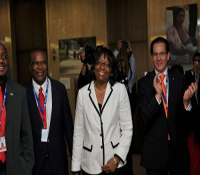 Dominican born Dr. Carissa Etienne has been confirmed as the new Director of the Pan American Health Organization (PAHO).

She was elected on Wednesday by PAHO member states during the 28th Pan American Sanitary Conference.

Dr. Etienne who is currently Assistant Director General for Health Systems and Services of the World Health Organization (WHO) in Geneva will begin her five-year term on February first 2013 replacing Dr. Mirta Roses Periago of Argentina, who has been PAHO’s Director since 2003.

Dominica’s Prime Minister Hon. Roosevelt Skerrit, who embarked upon an aggressive campaign to rally support for Dr. Etienne from May 2011, issued a statement on Wednesday on the accomplishment of Dr. Etienne who is from the community of Massacre.

“She came up against candidates from Costa Rica and Ecuador.  This is no doubt a very proud moment for her family, herself and indeed all Dominicans and CARICOM citizens because we were able to get the support of Caricom in that regard.”

“I want to place on public record Government's thanks, appreciation and gratitude to the CARICOM Heads of State and Governments, the CARICOM Secretariat and Secretary General, Ambassador Irwin LaRocque and the Government and people of Mexico for their extra ordinary support during the difficult months of campaign." Stated PM Skerrit.

The Dominica leader says the accomplishment of Dr. Etienne speaks volumes of Government’s efforts to improve its foreign policy.

The Prime Minister continued,“It is because of our bilateral and multilateral relationships and also the way in which this Government has been able to represent our country with a seriousness that catches the attention of the international community.”

“Dr. Carissa Etienne’s election signals the absolute confidence which the international health community has in her credentials but it also speaks to the respect, admiration and influence which the Government of Dominica has in the international and regional communities, to have gathered enough support to elect a young girl from the village of Massacre as the Director of PAHO.”

The Prime Minister stated further, “Our foreign policy is working and is bearing fruits.  Our cultivation of friendships with nations globally continues to bring great respect and pride to our people here in Dominica and abroad.”

At the World Health Organisation, Dr. Etienne led efforts to renew Primary Health Care (PHC) at the global level and to strengthen health systems based on PHC, promoting integration and improved functioning of health systems.

Prime Minister Skerrit stated that he is hopeful that in her new role as PAHO Director she will continue to promote Primary Health Care.

“The good thing about Dr. Etienne being elected into this office is that she has a very strong background in healthcare. She has been in large measure responsible for the professional leadership in PHC in Dominica particularly in the 80’s. Dominica has been credited by international parties including PAHO and the World Health Organization (WHO) as having an excellent model of PHC delivery in the world.  We are hoping that at the PAHO level that very important element of medical care can be promoted.”

PAHO celebrates its 110th anniversary this year and is the world’s oldest international public health organization. It works to improve the health and quality of life of the peoples of the Americas and serves as the WHO regional office for the Americas.

Dr. Carissa Etienne is the second CARICOM citizen to be elected into that office; the first being Sir George Alleyne of Barbados.