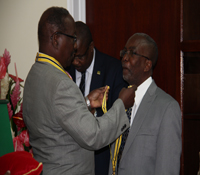 The Government of Dominica on Friday September 14, 2012 bestowed the nation’s highest award- the Dominica Award of Honor on Presidential Nominiee Eliud Thaddeus Williams at a brief ceremony in Morne Bruce.

The Dominica Award of Honour is the award of the highest recognition under the meritorious service honors act chapter nineteen nine of the commonwealth of Dominica.

This award is conferred on persons who have made significant contributions to the country. That award is traditionally presented during Dominica’s annual independence celebrations.

Friday’s ceremony however did not hold any less prestige and significance as it was held under the legal authority stipulated by the constitution of Dominica.

The Dominica Award of Honor was presented to Mr. Williams for his distinguished achievements in the area of public sector management by outgoing President His Excellency Dr. Nicholas Liverpool.

Mr. Williams’ citation read by Secretary to the Cabinet Steve Ferrol confirmed Williams as having given extensive service to Dominica’s Public service in various capacities. 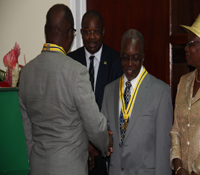 and holding board positions at the level of the Cooperative Societies League and individual Credit Union branches and whereas you have contributed enormously to the reform of the Telecommunications sector in the region through your work as Managing Director of the Eastern Caribbean Telecoms Authority (ECTEL) and played a pivotal role in developing the licensing regime through the creation of a licensing evaluation mechanism and whereas you have honored the name of Dominica by these achievements.”

Mr. Williams in accepting the prestigious award reflected on the role of his parents who instilled values of hard work, respect for others, integrity and honesty in him from an early age. 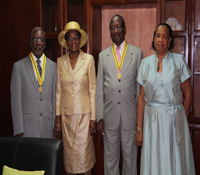 “They constantly reminded us their children that they were to be of service to others. They provided the fine examples of commitment, sincerity and also encouraged me to excel at school or at work. It is on this foundation on which I built my public service career” stated Williams.

Mr. Williams said “such high honor is a distinction that will always remind him to remain humble.”

Prime Minister Roosevelt Skerrit congratulated Mr. Williams for having been bestowed with such high honor, saying that the award is well deserved.

“I want to take the opportunity to congratulate you on behalf of the Cabinet of Dominica. We have had the opportunity to work with you over the years in the Public Service. No doubt the kind of discipline and seriousness which you brought to the Public Service helped tremendously in the execution of the States projects and programmes and also the delivery of services to its citizens.” 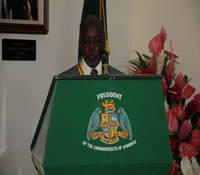 The Prime Minister said few Dominicans have received such a prestigious award.

“That award as you would recognize over the years has been carefully bestowed upon citizens. In recent time very few people have received such an award and therefore you are in a very privileged and highly acclaimed league of individuals who have received that award. We have no doubt that you will carry it with grace and the high expectations it requires.” remarked Prime Minister Skerrit.

The Newest holder of the Dominica Award of Honor is Government’s Presidential nominee to replace His Excellency Nicholas Liverpool as Dominica’s head of state.

It has been confirmed that Eliud Williams will be officially elected and sworn in as Dominica’s head of state on Monday September seventeen at the Parliament building in Roseau.

Mr. Williams is the only nominee since the Opposition United Workers Party did not name a nominee.