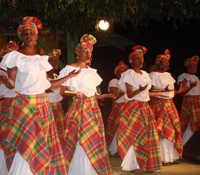 A diverse and very colourful six-week calendar has been released by Dominica’s Ministry of Culture to celebrate thirty-four years of independence.

The theme for this year’s the 2012 Independence Celebrations was revealed as: “Partnering for Further Progress and Development.”

Representing the Ministry of Culture at the media launch on Wednesday was Hon. Kelver Darroux. He called Dominica’s independence “a great cultural and tourism product” that ought to be developed through partnerships.

Hon. Darroux referenced LIME Dominica’s contribution to cultural enhancement as a good example since accordions were awarded to three major bands through LIME’s donation of a dollar from each entry ticket during Creole in the Park last year.

“In this vein, I wish to encourage the building of strategic partnerships such as these in order to support training in the arts. [These partnerships help] develop our cultural products and create more economic opportunities through music, art and cultural industries. We are all partners in national building and development,” Hon. Darroux said.

The recipients of the accordions were the Portsmouth, Petite Savanne and Giraudel Jing Ping bands.

Chief Cultural Officer, Raymond Lawrence opened the ceremony with his remarks on the objective of the theme.

According to Lawrence, this year is all about unity for national growth.

He said, “This year we observe our celebrations with the theme, ‘Partnering for Further Progress and Development,’ and it is with this theme in mind that we call on all Dominicans to work more closely together and to seek greater cooperation and collaboration in our ongoing efforts at community and nation-building.”

Lawrence continued, “ we’ve come a long a long way since Dominica became independent in 1978 but Dominica still has a lot of untapped potential that we have to explore and maximize. There is room for further growth and development and as we step into another independence season, let us also step into a new season of development for Dominica with the unity cooperation and effort of all Dominicans.”

At that ceremony, Minister for Community Development, Hon. Gloria Shillingford called for preservation of the island’s culture for generations to come.

She also stressed the value of keeping the island clean and green.

“I cannot overstate the importance of maintaining a clean and beautiful Dominica at all times but even more specifically during independence season when we welcome visitors to the country. We are marketing Dominica as the Nature Island of The Caribbean. Nature, in my mind, is synonymous with beauty and cleanliness. I urge you therefore to help keep this country beautiful beginning with your immediate environment.”

Hon. Shillingford continued, “For the third consecutive year, the focus for National Day of Community Service will be on cleanliness and beautification. I urge citizens to be out in large numbers, working toward the cleanliness of the Nature Isle.”

The Cultural Officer shared news that this year will see Dominica’s newest fete- the Quadrille Festival on October 10th.

Also this Independence, Warner will play host to the island’s Heritage Day on October 21st and the National Cooperative Credit Union will play its part with the first ever Cadence-lypso Competition in Newtown on October 20th.

Cultural Officer, Raymond Lawrence appealed to Dominicans to aim for an Independence celebration rife with participation but absent of violence.

Dominica’s Independence celebrations this year will begin on September 22nd with a National Day of Prayer and Thanksgiving, prior to the official opening ceremony which is carded for September 29th at the Old Mill Cultural Centre.

Independence 2012 will end on November 5th with the island’s annual National Day of Service.