The Hon Prime Minister was apprised of the Council’s needs at that meeting.

“Sixty thousand will go for road works and whatever else you decide are priorities. It would be good if you sent me a note indicating how you intend to spend the $60,000 so that we can reconcile [our accounts]. I also want you to send me your list of specific projects in order of priority so that I can tick them off the list,” the Hon. Prime Minister said. 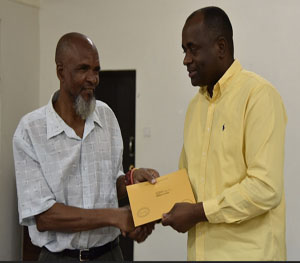 The Eggleston/Giraudel Village Council hopes to tackle minor road projects in the district.

The announcement was met with a round of applause.

That amount represents two thirds of the group’s budget for the show.

After nine years, the acclaimed Giraudel Flower Show made a comeback in 2013.

That absence was due to financial challenges including the lack of a suitable venue.

Subsequently, in May 2013, the organizers debuted a revived show in a location created for just that purpose.

Government had donated $40,000 for the Flower Show’s success.

The Hon Prime Minister hopes that at a later date, Government can make an additional donation for the event.

Further, the Hon Finance Minister revealed that $1.6m has been approved to rehabilitate the Castle Comfort to Giraudel/Eggleston Road.

“We are now doing the designs for some of the retaining walls... the edge failures in Eggleston are covered in that sum. We will be doing the emergency works and outside of that, we will come back and do some comprehensive work on the road surface.”

Additionally, Hon Prime Minister Skerrit told the Giraudel/Eggleston Village Council on Thursday, March 10th, that streetlights will be procured for the communities’ streets.

The council had indicated its need for such assistance.

He said, “We will make contact with DOMLEC and they will be in touch. You will take them to the locations because they will have to do the assessments and costings. I will authorise to the Ministry of Public Works to cover the costs associated with those eight streetlights. If you need additional lights, let us know so that we will have the completed list.”

He encouraged the council to consider requesting even more lights to facilitate more development in the outskirts of the communities.