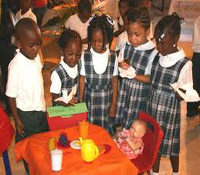 The Government of Dominica is committed to ensuring that every child of pre-school age in Dominica has access to a quality early childhood education program.

This is in keeping with Government’s policy of providing universal quality educational opportunities for all.

Education Minister Hon. Petter Saint Jean says the Ministry of Education is in the process of putting the necessary systems and infrastructure in place to allow for universal early childhood education to take root across the country.

“We have sought to address the issue of universal early childhood education by ensuring that every child receives access. We are in the process of establishing new facilities in some communities. In some areas we have modified existing structures and facilities.”

Universal access means that pre-school must be available for all children in the year before primary school. Government believes that providing access to a pre-school program will help children prepare for school, for learning and for life.

The Ministry of Education is hoping that communities will play a meaningful role in making universal early childhood education a reality.

“We believe that there are still too many children who are not covered at some early childhood education facility and we are seeking to establish participation and ownership with the communities where the communities can feel a sense of ownership as far as their children’s education is concerned ” he lamented.

Meanwhile the Minister has announced that children of pre-school age will be accommodated at some primary schools where early childhood education centers do not exist.

“I am pleased to announce that new pre-schools will be developed at some of our primary schools to include the Campbell Primary School, the Pichelin Primary, Marigot Primary, Roseau Primary, Trafallgar, and Woodfordhill Primary School. We will accommodate the children of pre-school age at these schools.”

A number of existing primary schools, namely the Castle Bruce, St.Joseph, Vielle Case, Colihaut, Delices and Petite Savanne already accommodate pre-schoolers.  The Minister confirmed this week that plans are to construct new early childhood education centers in Concord and Tete Morne during the course of this school year.

The Minister revealed that Early Childhood Centers now being remodeled to accommodate more students will be opened on September 10 and 17 respectively.