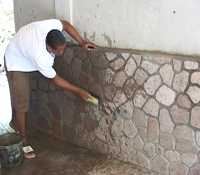 As part of Government’s thrust to prepare young people for the job market, five young men from the Roseau Valley area were hired under governments Apprenticeship Programme.  A recent initiative created to provide on the job training to trainees.

A GIS news team accompanied the Parliamentary Representative for The Roseau Valley Constituency, Hon. Dr. John Colin McIntyre on a site visit of the project Monday morning where a group of young men were actively involved in stone masonry.

The minister, enthusiastic about government’s recent initiative said, “We’ve been speaking about training and retuning our young people in Dominica because we have started losing this fine art called stone masonry.  I saw it fit to employ some of the young guys in the area.”

These young men are being trained over a period of nine weeks and are receiving a stipend of 50 dollars a day for their training.

The Parliamentary Representative is asking Dominicans to support these young men as they move forward.

“What I’d like Dominicans to do is embrace these young men into jobs, in terms of enhancing their properties around the various parts of Dominica.  What we hope to do is to take this sort of training out of the Roseau Valley into other areas and retool a lot of young guys to get them into the trade.

The apprenticeship programme falls under the small business support unit.

Meantime, work is progressing satisfactorily on the Titou Gorge Reception Facility in Laudat which will consist of a changing area, bathroom and bar.

“The Titou Gorge has never really received a building of this kind that we see happening right now.  In the past we’ve had little shelters around but nothing of this standard.  We saw it fit, through the ministry of tourism and they must be complimented for developing this project in terms of having this facility erected here.”