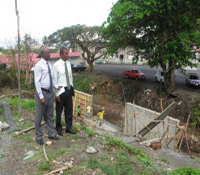 The student population at the Newtown primary school is expected to be significantly increased with Government’s proposed plans to construct a new primary school in Newtown.

Parliamentary Representative for the Roseau South Constituency made that pronouncement during a recent visit to the proposed site for the new school.

“The area is a very large catchment area. I think there are over two hundred students at the present school. The new school will make provisions for an increase in the number of students attending that school,” the minister noted.

Work on the construction for the New Newtown Primary School is expected to begin before the end of the year.

Preliminary work has already been done in preparation for actual construction. Recently the Ministry of Education constructed two major walls on the site selected adjacent to the existing primary school.

The Chinese Government through the Embassy here in Dominica has advised on a contractor who will be assigned to the construction of the new Newtown primary school.

The New Newtown Primary School to be constructed through grant funds provided by the Chinese Government is expected to be a state of the art school with modern amenities.

“We are delighted in the sense that we are going to receive a modern school. I have looked at the pre-liminary designs. The designs make provision for three levels- the ground level, a first floor and a second floor. The components of those floors will include science labs, cafeteria, an auditorium, office space for principal and vice principal, space for staff of the school, and approximately twelve classrooms. The school when complete will also have several amenities such as an art room and a computer room.”