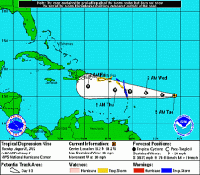 The large low pressure system that has been traversing the Central Tropical Atlantic for the past few days has acquired enough organized deep convection near the center to be classified as a Tropical Depression.

A Tropical Storm Warning has been issued for Dominica.

At 5am this morning, the center of Tropical Depression NINE was located near Latitude 15.2 North and Longitude 51.2 West or about 670 miles east of Dominica. The Depression is moving toward the west near 20 mph and this general motion is expected to continue for the next couple of days. On the forecast track, the cyclone should move through the southern Leeward Islands and northern Windward Islands Wednesday afternoon and emerge over the Eastern Caribbean Sea by Thursday.

Maximum sustained winds are near 35 mph with higher gusts. Strengthening is forecast during the next 48 hours and the Depression is expected to become a Tropical Storm later today.

An Air Force Reserve Reconnaissance Aircraft will investigate the cyclone this Afternoon.

The expected conditions are winds up to Tropical Storm for force by Wednesday Afternoon, rainfall amounts of 4 – 8 inches and rough seas.