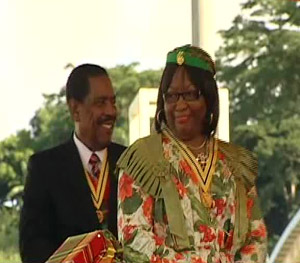 Dominica’s highest award, the Dominica Award of Honour was bestowed on Dr. Carissa Etienne at this year’s Independence Day Military Parade and 13 others were recognised fro service to country..

Dr. Etienne was recognised for her work in public health and international affairs. She is currently the Director of the Pan American Health Organisation.

Dr. Etienne contributed to public health in Dominica for over 38 years and has served both locally and internationally with distinction.

The second highest award, the Sisserou Award of Honour was bestowed upon Senior Counsel Anthony Astaphan.

He was described as the leading public and constitutional law practitioner in the Eastern Caribbean having represented several Prime Ministers and Governments in the OECS.

GIS News caught up with Senior Counsel Astaphan after the ceremony.
He said, “I feel proud and a sense of satisfaction because the legal profession, like politics- despite the public clamoring and applause- is a really lonely profession- particularly when it gets contentious and hostile as it does.

“You never really look over your shoulder to see if anyone is paying attention to the work which you’re doing so when all of a sudden- and it is all of a sudden because I didn’t know this was coming- a Government gives you the Sisserou Award as a sign of appreciation for your contribution to the law, civil society and the rule of law, you have to feel proud and appreciated.

“It’s good to know that people are…appreciating what I’ve been trying to do all of these years.”

Andreas ‘Andy’ Burkard told GIS News, “I was surprised to hear and it makes me feel different because all these years I have been in Dominica doing voluntary work and I feel honoured and I’m proud.” 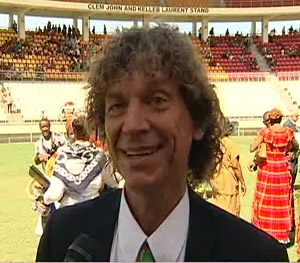 “I feel very elated and gratified by the fact that I was considered in terms of the services which I performed. I would just like to say that indeed hard work does pay off and as you continue to work, I would say do so for the love of country,” adds Benoit Bardouille.

Two individuals and one group received the Services Medal of Honour.

Allan John for community service, Cylma Agnes Cuffy for early childhood education and the First Serenade Band for its contribution to music in Dominica.

Carlton Winston, band leader shared, “This is a milestone for the band and we’re very thankful that the Government and people of Dominica recognized First Serenade with this award.

I woluld like to dedicate this award to my mom who recently passed. She was a founding member of the First Serenade Band; she would have been proud today.”