Dominica Council on Aging Continues Advocacy Against Abuse of the Elderly

President of the Dominica Council on Aging, Zetma Toussaint continues to speak out against the abuse of the elderly. 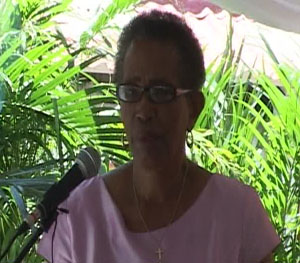 Speaking at the recent celebration of the 100th birthday of Josephine Lawrence of Grand Fond, Toussaint said abuse of the elderly continues to be a concern for her organization.

One example she gave is, “If an elderly person is taken from his/her home to live with a relative and they are confined to one room in the house…”

Toussaint assures that such incidents exist.

“Property is taken away from them. They are made to sign papers without being told what the papers are…We have to be on our guard.”

She called on all to support the Council on Aging as it prepares to host a regional conference in Dominica.

The event will be used to make recommendations to regional governments for the implementation of laws against the abuse of the elderly.

Plans will also be developed for support of the elderly following natural disasters.  The council is working collaboratively with other local and regional agencies in that regard.

“The Council on Aging, in its continuing efforts to educate and raise awareness of the issues affecting elders, will be convening and hosting the 3rd Caribbean Conference on Abuse and Other Issues of the Elderly.”

The conference is scheduled for November 30 and Dec 1 at the Fort Young Hotel.