Josephine Florestine Lawrence, better known as Mama Tin is the newest centenarian on the island.

Mama Tin a resident of the community of Grand Fond celebrated 100 years on October 23rd 2015.

A celebration was held in her honour on Sunday October 25th beginning with a church service at the Grand Fond Baptiste Church followed by a birthday party.

His Excellency Charles Savarin and Mrs. Savarin, the Hon. Minister for Youth and Sports, who was Acting Minister for Social Services, Justina Charles, and the Hon. Parliamentary Representative for the Grand Fond Constituency, Ivor Stephenson were among those who joined the celebration. 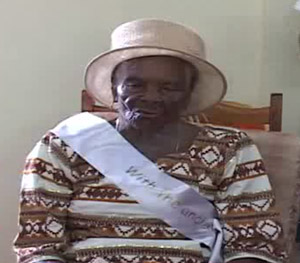 His Excellency Charles Savarin congratulated the centenarian on her milestone saying that it was a special moment for him as he was brought up by his grandparents.

The Hon. Justina Charles acted as Minister for Social Services.

She added that the Yes We Care Programme envisioned by the Hon.  Prime Minister, Roosevelt Skerrit was born out of the need to take care of the senior citizens who were neglected. Government also recently introduced a $200 monthly stipend to senior citizens of pensionable age.

President of the Dominica Council on Ageing, Zetma Toussaint was elated that another centenarian was added to the elite group in Dominica. Her council continues to work hard to advocate for the rights of seniors.

For Parliamentary Representative, Ivor Stephenson it’s an honour to have the largest number of centenarians in his part of the country.

Mama Tin is best described as one who was very devoted to her community. She was an active member of several social groups, acted as a mortician up to age 92 in her community and took care of many who were sick with her bush medicines.

Mama Tin will receive $500 monthly and free cooking gas from the government of Dominica.