The Rotary Club of Dominica has shown up in a big way for one survivor of Tropical Storm Erika.

On Monday September 21st, the Rotary Club presented a cheque of 2,180€ to have Santony Lazare airlifted out of the country to receive critical medical attention in St. Lucia. 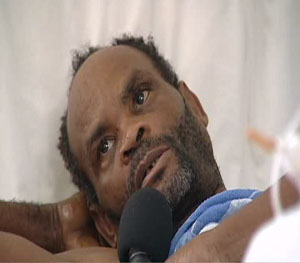 Lazare, originally from Petite Soufriere was at work on a farm at Rosalie Estate where he sustained injuries during the passage of the storm.

“I was on the farm and while I was cooking, I just saw a landslide taking over the property so I ran to the main road. When I got there, I saw another landslide. I tried to jump and fell into it. When I could get up, I did and started pulling myself out and cleaning myself off. When I pulled out one leg, it was broken so I just lay on the side from 11am to 4pm. A man going to Castle Bruce to work could not go further than my farm so he went back to Rosalie to get help,” he said.

He was then taken to the Riviere Cyrique Health Center where he said he received proper care until he was taken to the Princess Margaret Hospital three days later.

She said, “We were contacted by the hospital and informed that Mr. Lazare was in a critical situation...So the Rotary Club decided to give a donation. It’s exactly EC $ 7,000. We understand that the Government of Dominica will contribute the remaining balance.”

Facilities Manager at the Princess Margaret Hospital, Doreen Fabien spearheaded efforts for assistance on Lazare’s behalf.  She says the Government of St. Lucia has offered to do Lazare’s procedure free of charge.

“We just want to say thank you to the Rotary Club, the Governments of St. Lucia and Dominica and all those who assisted him in one way or the other.”

The Rotary Club has also been actively distributing relief supplies across the island to persons affected by Tropical Storm Erika.

The club has received donations in excess of EC $70,000 from other clubs and citizens living abroad to continue assisting with Erika recovery and rehabilitation projects.