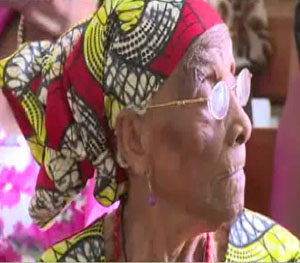 The community of Delices is celebrating yet another centenarian.

In attendance were H.E. the president of Dominica, Charles Savarin and Mrs. Savarin and the Hon. Parliamentary Representative for the Laplaine Constituency, Petter Saint Jean.

Ma Dor’s nephew, Dolton has been her caretaker for many years.

He feels honoured to care for his aunt.

An emotional Dolton revealed, “When she lost her husband, she felt that there were no options so I stood by her side and helped her to be strong. She didn’t know how she was going to bury him but I had the ability to help her.”
“I’m glad to be her son and see her reach 100 and I am part of it. Many times, I tried to leave her but I couldn’t,” he said in tears. “Forget the riches and money and think of life,” he advised.

H.E. Charles Savarin was moved by the testimony of Dolton, and responded in this way:

“I believe that although today is her anniversary, today is a day when we should really give recognition to Dolton for the tremendous work he has done for his aunt.”

The Hon. Parliamentary Representative is especially grateful for the commitment of young people like Dolton, who look after the elderly. 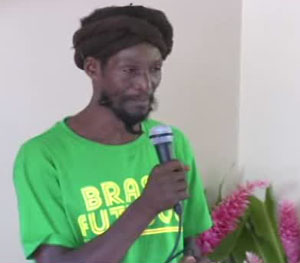 He described him as a young ambitious man committed to his garden and his aunt.

“That is the commitment that we want from our young people and family members. While the State has a responsibility to our senior citizens, we must also be cognizant of the fact that the family has a moral God-given responsibility to take care of their [family]. Dolton, thank you very much.”

Ma Dor as she is affectionately known still manages her home. She is capable of handling her washing, cooking and cleaning.

She got gifts from the President as well as the Hon. Parliamentary Representative, and on behalf of the Hon. Minister for Social Services, Catherine Daniel.

Ma Dor brings the number of centenarians in the south-east to six.

The Dominica Government has pledged to contribute to the care of each centenarian with cash monthly, free cooking gas and a stove where necessary.