Emancipation 2012 celebrations kick off this Tuesday 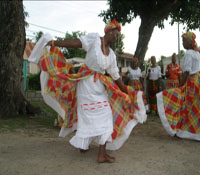 An African showcase at the Old Mill cultural centre on the evening of Tuesday July 31st will kick off activities marking this year’s Emancipation celebrations.

Gregory Rabess,Cultural Projects officer attached to the Cultural Division in an interview with the Government Information Service said the opening event carded for 6:30 p.m will be one with a strong African theme.

“The focus on Emancipation 2012 is on Africa and the African Showcase is going to be a very interesting event. We have teamed up with number of African nationals resident in Dominica and we are going to put on a display of African fashion, art and craft and cuisine.”

The Emancipation activities will continue on Wednesday August 01st, with the Golden Drum Awards ceremony to be held at the Arawak House of Culture from 8:00 p.m.  The Cultural Division will present four golden drum awards.

Rabess says this year the traditional night will be held in the village of Mahaut on Friday August 03rd.

“The traditional night has been incorporated into activities for the 2012 Mahaut Reunion celebrations. Every year we have a traditional night, with a special focus on the drums and bele’ and this year is no exception.”

Rabess said a major highlight of this year’s Emancipation celebrations will be the Emancipation Hike which is scheduled to take place on Saturday August 04th.

“The emancipation hike will take place on segment five the Waitukubuli National Trail which stretches from Pond Case into Castle Bruce.”

The Nature Island Book Fair and Literary Festival at the UWI Open Campus from August 10th to 12th will bring down the curtains on the 2011 Emancipation Celebrations. A number of distinguished writers are expected to be a part of this literary exposition.