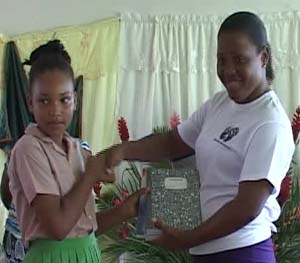 The Pierre Charles Foundation is newcomer on the student development scene.

She will attend the Pierre Charles Secondary School in September.

“She did not get a bursary but her scores were high enough. We know she has the potential and can do very well.”

Hon. Charles revealed that the scholarship contribute s $500 annually in addition to the purchase of all of Abigail’s required books totaling $848.22.

“All we are asking is for her to take her school work seriously,” Minister Charles said.

Launched in January, 2015, the Foundation marked the 11th anniversary of the death of Prime Minister, Pierre Charles, and was the brainchild of his daughter, Faiza Charles.

The foundation will take a holistic approach to the education of Abigail.

“We want that at the end of the five years, the Pierre Charles foundation can be proud of her achievement. We will be looking at her reports so if she requires any remedial work, we will work with her. We will engage her in something that will prepare her for secondary school over the summer.”

The foundation also made a presentation to the Sword Preschool in Grandbay, which it adopted at its launching.