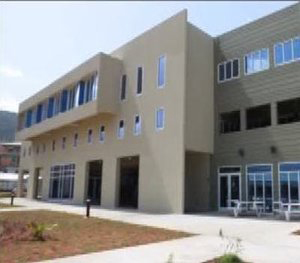 Designed to provide a space which promotes collaboration among students and faculty, the Student Centre is the largest building on the campus. It is intended to become the hub for the Ross University School of Medicine community as well as a welcoming facility for visitors.

Addressing the opening ceremony on Thursday May 14th, interim Senior Associate Dean, Dr. Stanley J. White says he believes that the new building will have a positive effect on students.

“I believe it will be the centre of another transformation: that of the learning experience of our students,” he said.

DCK Dominica served as General Contractor and Construction Manager of the approximately 50,000 square foot building which includes a library, student study space, multipurpose rooms, a centre for teaching and learning, a large dining area and space for three vendors, space for a campus store and offices for the Departments of Student Affairs and Student Services.

Ross University School of Medicine, Dean and Chancellor, Dr. Joseph Flaherty says the Government and people of Dominica have always been a major supporter of the school.

Representing the Hon. Prime Minister Roosevelt Skerrit was Acting Prime Minister the Hon. Dr John McIntyre, who noted that the new building is a step in the Dominica/Ross partnership.

“We regard Ross as a serious institution which has helped transform Dominica’s economy. I must say, we’re very happy for that. Government will always continue to be your best friend in Dominica,” he said.

Among those attending the ceremony were the President of Dominica, H.E Charles Savarin and Mrs. Savarin and the Hon. Minister for Trade, Ian Douglas.

The project costed $18 million dollars with a total construction time of 17 months.