Kalinago Community Encouraged To Press On 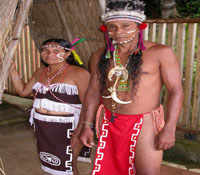 Dominica’s indigenous people have been advised to consolidate the gains made in the Kalinago Territory since attaining ownership of the lands over a century ago.

On Wednesday July 4th,, the Kalinagos Indigenous Nation Developers (K.I.N.D) organized a special torch relay activity in recognition of the one hundred and nine years since the establishment of the Kalinago Territory.

Gregory Rabess, Senior Cultural Officer and a native of the Kalinago Territory says the Kalinago people have evolved over the years.

Rabess notes that much effort has been made to preserve the Kalinago history through the formation of several cultural groups.

“We will remember the work of the Karifuna cultural group, their appearances in DOMFESTA and all over Dominica. This brought about a new sense of respect and pride for the Kalinago people not just in Dominica but across the region.”

Rabess says Dominicans now look at the Kalinago people in a new way.

Rabess is advocating that the Kalinago people look back on their achievements as a native people and strive to excel further.

“We have come a long way, we have made some significant gains; we have done many things, and let us not take them for granted. What we need to do now is to take it to the next level, mobilizing young people using the latest communication technologies to assist with the documentation process and to create new Kalinago products.”

The Kalinago Territory is made up of 3700 acres of land with over three thousand native Indians residing there.