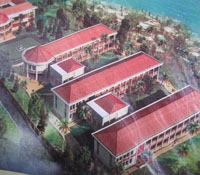 The Government of Dominica along with friends from the People’s Republic of China on Tuesday July 03rd celebrated the completion of the main structure building of the Dominica State College Expansion Project.

The project is being funded through a thirty million dollar concessionary loan from the China Export Import Bank (EXIM Bank).

The state of the art education facility which will consist of five new structures is now sixty percent complete and is expected to be ready by October 2013.

Education Minister Hon. Petter Saint Jean in addressing the ceremony said the state college expansion project is testimony of the great partnership existing between the Government of Dominica and the People’s Republic of China.

“This partnership has created opportunities for each of our countries to learn about each other’s culture. It has brought us the funding and the skills to rehabilitate the Edward Oliver Leblanc Highway and has brought us to the construction of the New Dominica State College which as I speak continues to rise like a monument on the Stockfarm landscape”.

The Government of Dominica has recognized the value and importance of higher education and has set as its policy the goal of one college graduate per household by the year 2015. Education Minister Saint Jean expounded on that policy during his address.

The Minister took the opportunity on behalf of the Government and people of the Commonwealth of Dominica to thank the Government of the People’s Republic of China for making this project possible and for responding to Dominica’s need to improve on the learning environment for the young people of Dominica.

“We needed help to build a campus with the kind of infrastructure necessary to create an environment that is student friendly, safe and conducive to learning and for this we are grateful”.

The new state college project when complete is expected to accommodate 2000 students comfortably.

The project is being built by the Shanghai Construction Company and will also include the construction of a food court, a car park and a water supply tank.