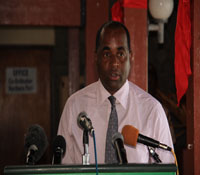 Prime Minister Hon. Roosevelt Skerrit says the Government of Dominica is committed to the fight against illegal drug trafficking.   He says, the commissioning of two patrol boats should serve as a strong indication for criminals that government is dedicated to the cause.

The p.b. Lugay and p.b. Royer were commissioned during a ceremony at the Cabrits cruise ship berth in Portsmouth last week.

The Prime Minister said, “Among the primary responsibilities of any Government is that of ensuring the safety and security of the citizens of the state and of the communities of which they live.  There are many hazards that can threaten the safety and security, some of them are natural and often are readily identifiable.  Others are induced by activities of man.  The latter are usually subtle, insidious and less readily identifiable than the former.”

25 police and customs officers received training to operate and maintain the two vessels.  Other advanced techniques of sea, land and air interdiction were also part of the training programme.

“Those who are bent on mischief are forewarned that they may be able to run but they will not be able to hide for the forces of law and order are operating on the seas of Dominica.  We will catch up with you and subject you to the full force of the laws of Dominica.”

The continued collaboration between the United States and Dominica will seek to eradicate criminal activity and elements on Dominica’s shores and provide an opportunity to strengthen its border management system.

“The ground breaking for construction of a new Coast Guard facility is further evidence of government’s determination to seal and secure our borders against the transit or entry of harmful and illicit substances and weapons of mass destruction.  In so doing, we are taking to another level, the combat against crime and criminal activity in Dominica and the region.”

These vessels were provided by the Government of the United States through the Caribbean basin Security Initiative.