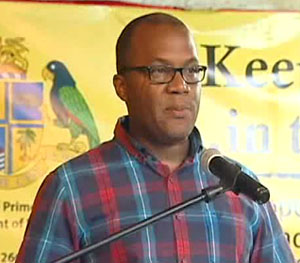 There is evidence that the tourism industry is growing.

So says the Hon. Minister for Tourism and Urban Renewal, Senator Robert Tonge.

The Minister says this growth is as a result of proper planning.

A number of Dominica’s premier natural sites are situated in that part of the island. This in mind, the Hon. Minister took time to explain his Ministry’s role in growing the industry.

He says contrary to what some may believe, there is evidence that the industry has shown marked improvement.

“At the end of 2014,” he reported, “there were 81,472 stay over visitors. That is a 4.1% increase from the previous year. The main objective is to increase the number of stay over visitor arrivals and for them to spend as much money as possible.

“For the year, 2014 persons coming to Dominica actually contributed $343m to the economy. Obviously no one person gets it all. The hotels, taxi drivers, vendors get it; it is spread all over the country both directly and indirectly even to the banks and telecommunication companies.”

The Ministry has engaged all stake holders including vendors, hoteliers, taxi drivers and tour guides in its efforts to boost the industry.

The Ministry of Tourism is also concentrating on revamping the destination’s marketing strategy to ensure the message about Dominica is clear and attractive.

Hon. Tonge says service is another critical aspect of the industry which requires attention.

“The Government of Dominica is ensuring that we put in place training programmes to ensure that all the persons touching the tourist or visitor are properly trained. That starts from the immigration officer to the customs officer to the taxi drivers to the hotels, the tour operators, the tour guides. Everybody has a role to play to give the best possible service to the visitors.”

Government has approved $6m for the Ministry of Tourism in the 2015/2016 national budget, a 33% increase from the previous year.

Hon. Tonge says this demonstrates Government’s commitment to the industry.

Air access which has also been a challenge for the industry has also received attention.

“Through the Discover Dominica Authority we have an Air Access Committee which has been speaking with all the airlines to ensure that people can come to Dominica much easier. In the past, when you had to come through Dominica, you had to book your flight through LIAT and then American Airlines. You no longer have to do that because of the partnerships which LIAT has. Right now, you can book your ticket through Seaborne and have your bags checked all the way to Dominica,” the Hon. Minister said.