NET: A Community-based Group Working for a National Cause 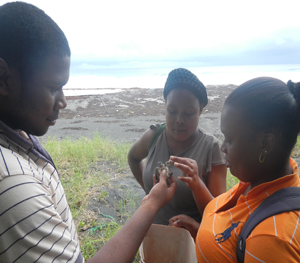 A small community-based group in Rosalie is working tirelessly for a cause of national interest.

The Nature Enhancement Team or net is doing just what its name suggests –not just for Rosalie but for the country which considers itself the nature island.

“Our general objective is to enhance nature so we’re really concerned about the environment. We have primary responsibility for the Rosalie Beach but we are also responsible for the nature trail which provides public access to the Rosalie Beach,” says Simon Geroge, President of NET.

NET is a part of a network of similar groups around the island brought together by the Dominica Sea Turtle Conservation Organisation (DOMSETCO) which represents Dominica in the Wider Caribbean Sea Turtle Network (WIDECAST).

About 15 people comprise the Nature Enhancement Team which is successfully getting its message across in the community and at schools.

Meanwhile four members take shifts patrolling the Rosalie Beach throughout the night during nesting season which runs from March until August. 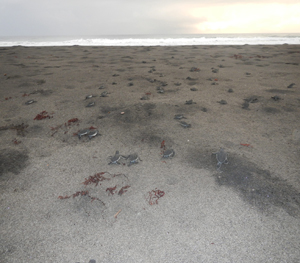 Besides the all-important mission of protecting Dominica’s natural resource and the three endangered species which nest here, the Nature Enhancement Team is doing its part for community employment.

He says, “The strategy for us, while protecting the turtles and working with the communities, is creating opportunities for income generation. So we are involved in providing hospitality services like when we have guests staying at the guesthouses; members provide food and drinks. We are also involved in school outreach activities. Some of the members are not directly involved in turtle research and conservation on the beach but are involved in other activities associated with the programme of group.”

The group president says turtles have allowed them to find their niche in an area dominated by agriculture-based livelihoods.

“The idea is to find alternates. The turtles give us comparative advantage because we are very fortunate to have three species of endangered turtles coming to nest on our beach. 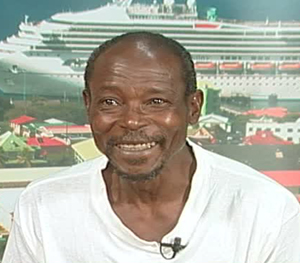 According to George, Government support to the group has allowed them to do more for turtle conservation and community awareness.

“The National Programme Programme,” he began, “Thank God for the NEP. That has been a major help for us. I mean I can’t emphasise that enough. We are very, very grateful.”

The Nature Enhancement Team sees its work in their own corner of the island as a contributor to Dominica’s image as the Nature Isle of the Caribbean and George sees a bright future for the group.