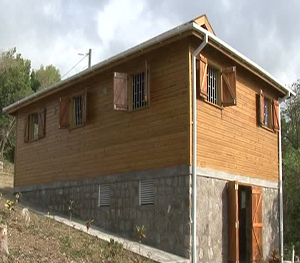 Residents of the culturally-rich and northernmost community of Capuchin got their Tourism Reception Centre on Monday May 18th- a joint effort of the European Union and the Government of Dominica.

This centre which will serve as a hub for information about Cana will also aid in promoting tourism-related aspects of the community.

Additionally, the Ministry of Tourism says the facility was designed as the main administrative centre for the Capuchin Tourism Group and will be used as a base for dispatching tours to attractions in the area because of its placement between Segments 13 and 14 of the Waitukubuli National Trail.

According to Technical Officer, Emaline Humphreys, the structure is only phase one.

“The development of the park has been considered for advancement or enhancement through a phased approach, so the centre is actually part of Phase One. Other phases will follow where the group will undertake to construct washroom facilitates which will also be used by trail users, a restaurant and other amenities as deemed necessary,” Humphreys explained.

Close to $340,000 was invested in the two floor structure which made of local wood and stone. This is in addition to another $300,000 spent to purchase the property where there Cana Heritage Park now sits.

Local historian and Coordinator of the Capuchin Tourism Group, Dr. Lennox Honychurch revealed that in the history of the structure lies a British Signal Station.

“This building here was the Signal Man's barracks, so they lived here and when the project was beginning, these walls, which are the original walls that have fallen apart, were recreated. The architect followed what was there, so we have the original size and layout of the building on the same spot,” he explained. 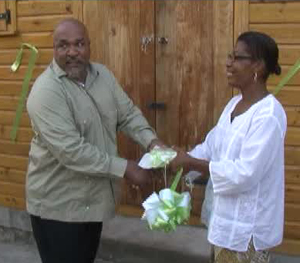 According to the Hon. Parliamentary Representative, Reginald Austrie, the next obvious step is to capitalise on the new, larger tourism product which now exists in the north.

“It’s one constituency, and each of those hamlets has a different product to offer. At the Cabrits we have the cruise ship birth, we have Cold Soufriere on the other side, the Tan Tan development which calls for more marine activities, Toucarie which has the entertainment then Capuchin to continue the trail and go to Penville and back.

So I see Cana as really locking the entire north of the country from the Cabrits to Penville. So sometimes in our planning we must not just hone in on Capuchin but use other areas and activates to enhance the potential which Capuchin itself has. I believe that if we can tie all these communities together, we may be in a better position to secure the funding which we need for joint activities rather than going selfishly and alone,” Hon. Austrie believes.

He said, “Last year, in 2014, persons spent $340m in Dominica. Anyone coming to Dominica must eat and drink so if we say at least 20% of what they spend goes toward food it means that over $68m would have been contributed towards persons purchasing food.

Capuchin is the third community this month to get facilities to boost community tourism and employment.

Laudat was first to receive a floating jetty and four boats for the Freshwater Lake and Marigot got its Tourism Information Centre just last week.

These projects are funded by the 10th European Development Fund.

According to the Fund’s local authorising officer, Carleen Roberts, the 10th EDF was designed for budgetary support of which tourism is a large part.

“The European Union is and has been a true development partner of the Commonwealth of Dominica. The EU Has provided support to our development in many different ways. Particularly, tourism has been a beneficiary of a significant quantum of EU resources. Under the 10th European Development Fund Multi-sector General Budget Support Program, the EU supported the implementation of the Growth and Social Protection Strategy. Specifically, funds were provided to the Government of the Commonwealth of Dominica to attain growth in the economy which will generate jobs and reduce poverty,” she shared.

Roberts adds that communities are just beginning to see the benefits which community tourism can have on both tourism and employment.

“All proposals received by the Ministry of Tourism emphasised well-researched potential effects as these projects are expected to positively impact the number of people directly benefitting from eco-tourism and increased employment in the sector.”

She said to the community of Capuchin, “The proposal submitted on your behalf was extremely well-detailed and well-thought out. It clearly articulated both the short and long-term benefits of the project which makes it feasible. You the residents and other stakeholders deserve and are indeed well-fortunate to be one of the selected beneficiaries of the 10th EDF programme.