$30,000 in Equipment for Freshwater Lake Adventures 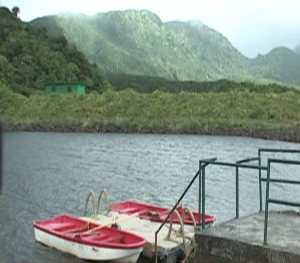 The Dominica Labour Party Government has rallied the support of the European Development Fund to deliver more than $30,000 in equipment for Laudat.

A floating jetty and four boats were commissioned on Friday May 1st specifically for community tourism and employment in that community.

The recipient, Freshwater Lake Adventures, was represented by Claudette Rolle, the General Manager of the facilities at the lake.

She explained that the organisation was rebranded and repurposed to better suit the aim of bringing more visitors to the lake.

“This name change is intended to better broadcast the adventure experience being offered; it would better appeal to experience-seeking visitors,” she said.

She described the vision “To capitalise on the human, natural, cultural and built resources of Laudat and its surrounding communities and to offer top quality community-based tourism products and services in Dominica thereby making Laudat with its Fresh Water Lake internationally recognised as a model community tourism provider.”

The National Authorising Officer of the European Development Fund, Carleen Roberts says the purpose of the 10th EDF is specifically to support programmes of Government’s Growth and Social Protection Strategy (GSPS).

That plan, according to the Hon. Tourism Minister, Robert Tonge, recognises community tourism as an avenue for social and economic development.

“The 2014 GSPS explains very clearly that attention will be given to community tourism projects on the basis that they will generate participatory ownership of the island’s tourism industry and can be marketable-that’s extremely important. It has to be marketable and if it’s not, then it can’t be sustainable.

“Also, it has to be sustainable. You have to do everything in your power to make it work because you can only get so many grants and donations. At some point, t the organisation has to [run on its own],” the Minister began.

“The promotion of community tourism is a high priority for Government because of its potential as both a significant tourism product and a means of community empowerment. The more money spent here means more employment.”

The Hon. Minister assures that Government and its agencies will work with service providers to promote their community tourism-based businesses.

This is evidenced by the tremendous amount of work which has gone into Friday’s commissioning.

The floating jetty and four boats now at work in Laudat is part of the larger plan to bring employment to communities.

According to the National Authorising Officer, there was concern that despite the worldwide recognition of the Morne Trois Piton National Park World Heritage Site in the area, enough benefit was not reaching the people of Laudat.

“About 15% of the local population expressed that the beauty and intrigue of Freshwater Lake could not be fully appreciated by merely standing on the western shore. They indicated that several beautiful and exotic aquatic plants which exist in protective coves would be best enjoyed when viewed up close therefore guided boat rides would allow visitors and locals to not only observe the flora and fauna but visit the hidden inlets of our mysterious and beloved Freshwater Lake,” Roberts said.