Dominica Says Thank You To The Government And People Of Japan

The Government of Dominica and in particular the Ministry of Foreign Affairs is saying a hearty thank you to the Government and people of Japan.

This stems from an over 20 year friendship between the two countries since Dominica established bilateral relations with Japan in 1978.

The year 2014 marks the Japan CARICOM friendship year, designated by Japan to recognize two decades since the first J 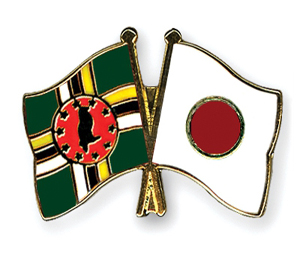 Sonia Akpa is the Director of Political Affairs in the Ministry of Foreign Affairs and CARICOM Affairs.

She says of the many programmes which Dominica has benefitted from with assistance from Japan, the Grassroots Programme stands out.

“One of the programmes we have benefited a great deal from is the Japan Grassroots Humanities Project. In this project funding is provided for small development projects at an amount of about US$83000 per project. Japan has funded many projects in the area of education; however most recently they have provided an ambulance to the Red Cross Society and a cafeteria for the Trafalgar Primary School. CALLS in Portsmouth have also received assistance as well as several other schools who received assistance in the form of fencing.”

She also noted that the Japanese Overseas Corporation Volunteer’s Project is another which Dominica has greatly benefited from. This particular project was suspended this year but will recommence in 2015.

Under this project Japan provides the services of young volunteers who are experts in their field.

Japan has given assistance to Dominica through their Official Development Assistance which consists of both technical training in Japan and the Japanese Overseas Cooperation Volunteers, grant assistance for grassroots human security projects, cultural aid programmes, and grant aid for fisheries.

A new addition to these grants is an Industrial Products Grant introduced in 2014.

According to Akpa, “The Prime Minister earlier this year signed a US$1M agreement with the Ambassador of Japan which will provide funding for what they refer to as industrial products, such as heavy equipment; tools and supplies. Samuel Carette of the Ministry of Finance is responsible for that project and this is one that I feel is a real cooperation between the two countries.”

Akpa revealed that tools and heavy equipment to be supplied by Japan will be purchased in areas of Japan affected by the 2011 tsunami in an effort to rebuild the economy of that part of Japan.

Since the establishment of Bilateral Relations between Dominica and Japan, Akpa says millions of dollars have been spent to improve various sectors in Dominica including, fisheries, tourism and culture.

In fisheries alone, Japan has spent in excess of US$51M.

“The Government of Dominica provides support to Japan’s Government for various candidatures for International Organizations like the UN and that is extremely important to them. It is not something that we can put a value on but when they ask for support to become members of Committee of Elimination of Discrimination or Violence against Women; The United Nations Security Council Non-Permanent Seats and all of those UN Organizations, which is something that is extremely important to Japan,” Akpa said.